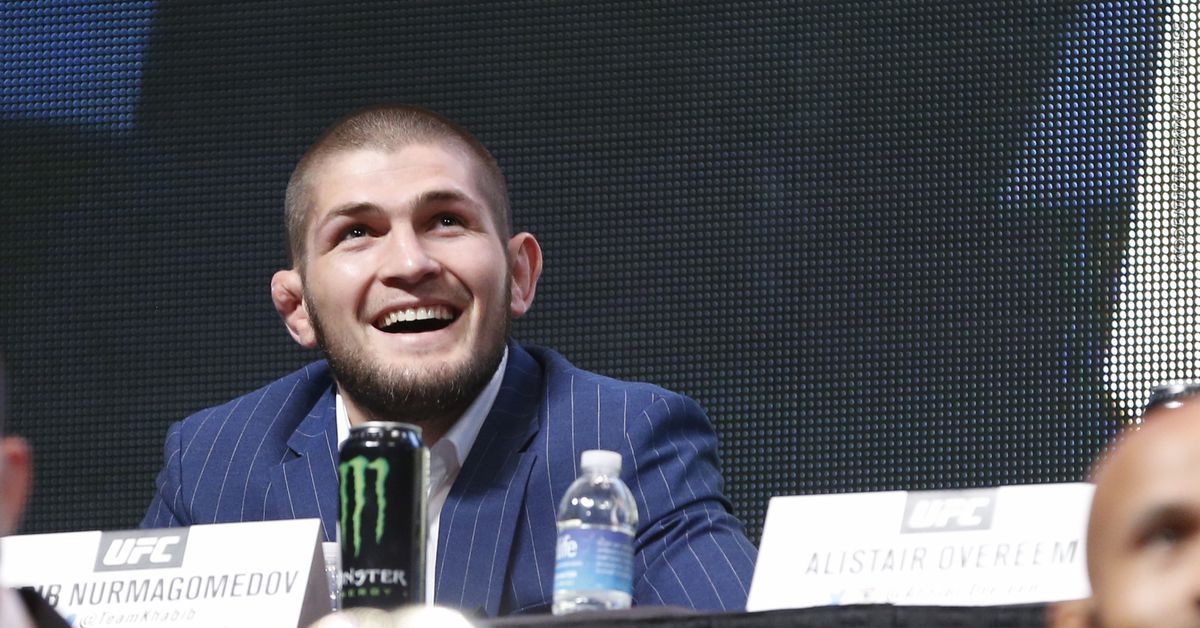 Next weekend, UFC lightweight champion Khabib Nurmagomedov will defend his title against Justin Gaethje at UFC 254 on Fight Island. But before “The Eagle” flies again, he’s doing his best to look out for one of his most trusted teammates.

Longtime Nurmagomedov training partner Islam Makhachev was supposed to face former lightweight champion Rafael dos Anjos next weekend on the main card of UFC 254. Unfortunately, dos Anjos was pulled from the card after testing positive for COVID-19 and, during the scramble to find a replacement, Khabib suggested that Tony Ferguson should fight with Islam, with his manager Ali Abdelaziz even offering to pay Ferguson $200,000. Ferguson rejected the offer and, unable to find a replacement opponent for Makhachev, the UFC ultimately removed him from the card. But though the chances of a fight next weekend are slim, Khabib has now moved on from Ferguson to targeting another big name: former Bellator champion Michael Chandler.

On his YouTube channel, MMA analyst and former title challenger Chael Sonnen reported that he spoke to Khabib who told him that if Chandler fights Makhachev and wins, then Khabib would view him as the top contender.

“(Khabib) said, ‘Chael, I watch your videos, I need to tell you something. I want to make this very clear,”’ Sonnen recounted. “He said, ‘There’s no one I’m closer to than Islam.’ And he said, ‘I’m telling you right now, if Michael Chandler beats Islam, I will view Michael Chandler (as) the number one contender, and I want you to get the message out.’ I said, ‘OK, Khabib, when I get the message out, I’m gonna say you called me, you told me this.’ He goes, ‘That’s what I’m doing. Get that message out.’”

Chandler is the newest addition to the UFC lightweight division. Competing there for most of his career, Chandler won the Bellator lightweight title on three separate occasions and wrote his name across the Bellator record books. But this summer, Chandler finally moved on from Bellator and signed with the UFC, making a splash as he did so. Though he’s never competed in the promotion, Chandler has been afforded an important opportunity at UFC 254 as the backup competitor to the main event. Should either Khabib or Gaethje be forced out of the bout, Chandler will make his debut competing for a UFC title. And since Makhachev and he are both already in Abu Dhabi and were/are preparing for fights, a last-minute bout between the two could still be manageable and Sonnen believes that Chandler would be willing to do so.

“I was wondering only slightly why I was being told that in terms of there’s no way that Chandler was offered Islam and Chandler said no,” Sonnen opined. “Generally when I get a phone call like this, it’s because one guy isn’t coming to the table. I would be stunned to hear that happen. I am very confident telling you guys that did not happen. I am very confident. Michael Chandler will step in and fight anybody. As a matter of fact, he’s waiting for that phone call to come.”

With the prospect of a true title shot on the line, perhaps Chandler is. At 34 years old, Chandler is nearing the end of his prime fighting years and thus has little time to lose. Something like this could provide him a shortcut to the front of the line at 155. However, there is the problem here that Khabib has said something similar before to someone else.

In response to constant inquiries about who he might choose to fight next should he get past Gaethje, Khabib has previously stated that whoever beats Dustin Poirier is who he would consider worthy of a title shot, even if that man were his better rival Conor McGregor. And as fate would have it, things seem to be trending towards a fight between McGregor and Poirier early next year, which means Chandler may need to act fast because, as Sonnen pointed out, Khabib is a man of his word.

“I think this is real simple. Islam needs to ask Chandler, ‘Do you want to fight me?’ Get Sean Shelby involved and make the fight,” Sonnen concluded. “I’m in on that match. Khabib just sweetened the pot. He didn’t say Chandler is gonna be next, he said, ‘I will view him as the number one contender.’ We all know what that means. Khabib is a man of honor. He is a man of respect. . . If Khabib views you as the guy, you’re gonna be the guy facing Khabib.”

As always, it pays to have friends in high places.

Results. Check out the results from Bellator 249.

Prospect. Khamzat Chimaev sizes up potential opponents: Darren Till ‘not my level,’ Demian Maia ‘maybe I choke him out’.

All BS aside, Islam Makhachev is actually the correct debut opponent for Chandler. Good guy on fringe of top-10, attached to one of the biggest names in the division. If Chandler beats Makhavchev, very easy to book him in a No. 1 contender’s bout, and if he loses, it’s a big win for Makhachev. Much to gain on both sides and both men will just be sitting there in Abu Dhabi. They really should make that happen.

Thanks for reading, enjoy the fights, and see y’all on Monday.

Who wins this weekend?