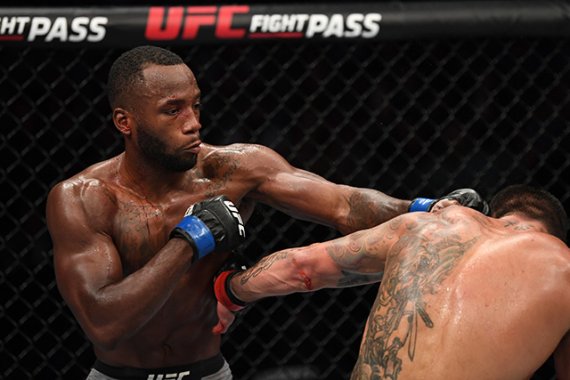 Leon Edwards has been the odd man out in the Ultimate Fighting Championship’s welterweight division thus far in 2020.

After his proposed UFC London headlining clash in March with Tyron Woodley fell through due to the COVID-19 pandemic, Edwards has seen the many of the top contenders at 170 pounds booked in the ensuing months while he stays stuck on the sidelines.

Currently, Gilbert Burns is slated to challenge reigning champion Kamaru Usman at UFC 256 at the end of the year; Woodley will lock horns with Colby Covington later this month and there are rumblings that Jorge Masvidal will book a “BMF” rematch with Nate Diaz early in 2020.

Edwards, who has a history with Masvidal, is especially frustrated that “Gamebred” is looking for a rematch with Diaz.

Edwards has won eight fights in a row but hasn’t competed since outpointing Rafael dos Anjos in UFC on ESPN 4 main event in July 2019. If no options present themselves, Edwards would be open to a showdown with Nick Diaz, who is rumored to be interested in making a UFC return.

“I’ve done enough to deserve a big fight, a big name — I don’t think any fight will do,” Edwards said. “At least a name to motivate me to go out and do the job. I heard Nick Diaz is coming back; that’d be a good fight. He’s a popular name. It would be good to beat Nick, that’d be nine in a row. But any of these big names, I believe I am better than them.”

Guilherme Cruz - September 8, 2020 0
UFC veterans Rousimar Palhares and Sergio Moraes will make their Taura MMA debuts in Rio de Janeiro, Brazil, on Oct. 23, taking on Sean Loeffler and Jared Revel in a fight card headlined by four championship bouts, sources told MMA Fighting. Palhares vs. Loeffler was originally booked for Taura MMA 11, set for Oct. 30 in Florida, but the promotion decided to moved it to the Rio de Janeiro card. Moraes (14-6-1) makes his return to the cages after a seven-year run in the UFC that included wins over the likes of Neil Magny, Tim Means and Ben Saunders. The TUF: Brazil 1 runner-up was let go by the UFC after losing three in a row in 2019.

Dominick Reyes puts Jon Jones behind him: ‘In order to be...