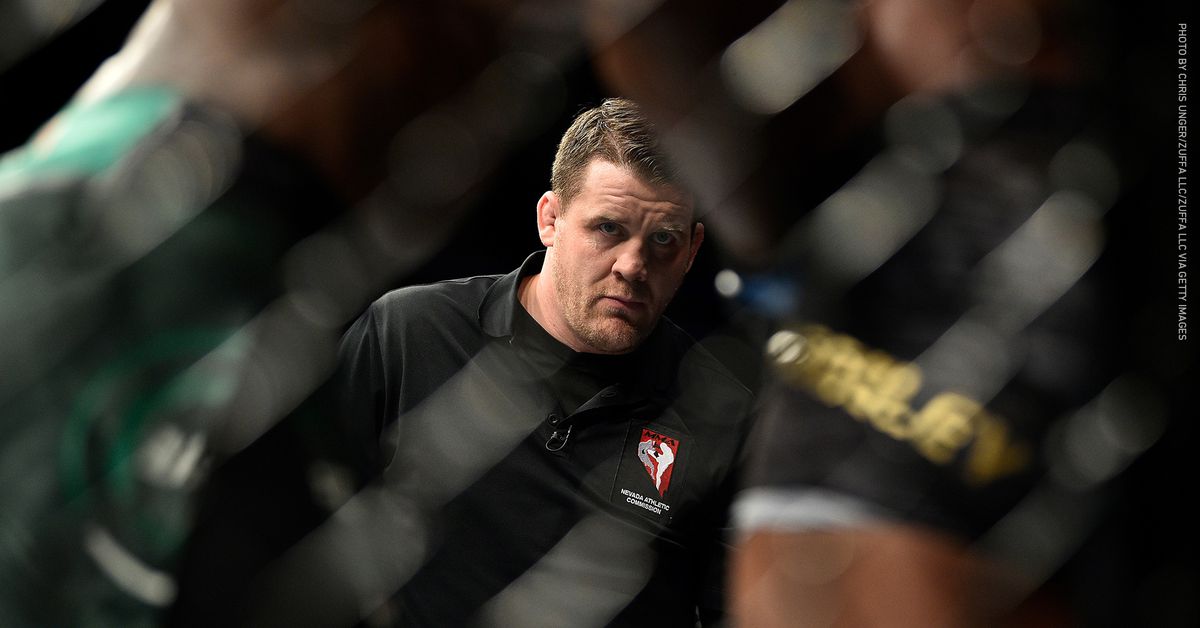 Referee Marc Goddard has been the third man for many legendary encounters in the sport of MMA.

At UFC 252, Goddard was selected as the third man in the octagon for the heavyweight trilogy fight between Stipe Miocic and Daniel Cormier. In a professional sense, Goddard doesn’t get lost in the glitz and glamour of being part of such a historic matchup, but admits that it’s something that he holds near and dear to his heart.

“It’s always an honor,” Goddard told MMA Fighting while appearing on What the Heck. “Without sounding cliche, when you’re officiating the biggest prizes in this sport, it’s never taken lightly. Complacently doesn’t creep in. For a fight of that magnitude, to be selected again was very comforting, very humbling and it’s something I hold dear every time.”

Goddard also was the referee of record for the first meeting between Miocic and Cormier at UFC 226 where “DC” earned a first-round knockout win to become a simultaneous two-division world champion.

Miocic would go on to win the next two meetings, including a unanimous decision in the final battle at UFC 252. The fight was billed as Cormier’s last, which he officially revealed to be the case on his ESPN show earlier this week.

Having been able to follow Cormier’s career, and share the cage with him in an official capacity, Goddard believes the appreciation of Cormier among the MMA community will only continue to grow now that he’s not longer competing.

“There’s not many superlatives you can leave out to describe him,” Goddard explained. “The guy has had an exemplary career, through his Olympic wrestling pedigree and fighting, working with high school kids, the personal things he’s had, and then obviously such a storied MMA career being a two-weight, two-division champion. He was a champion in Strikeforce, a champion in the UFC.

“What more can you say about a guy like that with that kind of track record?”

In the final encounter, a pivotal moment took place in the third round. As the stanza came to an end, Cormier began to complain of a Miocic eye poke. Goddard didn’t see it in real time and encouraged the fighters to continue on. As the replay showed, Cormier took a deep poke to his left eye that seemed to change the momentum of the fight.

Despite having a lot of trouble seeing, Cormier performed admirably, even winning the fourth round on two of the judges’ scorecards. In the end, Miocic won the fifth round and the fight to remain champion as the happy ending Cormier fans hoped for was not to be.

Goddard received a lot of criticism for missing the eye poke and took to social media the next day to admit his mistake—even stating he reached out to Cormier personally to apologize. In a sport where officials aren’t seen often in the public eye, Goddard felt the compelled to go in a different direction.

“For me, speaking publicly as an official, there’s an old adage that it’s frowned upon if the officials talk,” Goddard said. “There’s certain people in certain places and certain positions that do not like when officials speak with the media in any description. I’ve never supported that kind of thought because, first and foremost, if I’m ever gonna talk about the sport, and talk about it publicly, nobody has to tell me how to uphold the integrity of the sport. Nobody has to tell me to be professional, nobody has to tell me to say the right thing because I think I’ve demonstrated that many times over the years.

“When it came to the actual thing with DC, it’s just part of me as a person. Acceptance and acknowledgement are big things for me. I’ve always been the same. You can Google my name and there’s a handful of instances where I’ve actually spoken out and said I could’ve done things differently.

“But with something like that in such a pivotal fight, obviously on the replay, it was clear as day what happened. I just felt compelled to do that. It’s part of my acceptance. This is a very personal thing for me and speaking out the way that I did, it meant a lot to me, personally, to be able to accept and acknowledge the fact that I made a mistake.

“I’m not afraid to use the words wrong, mistake, difference, sorry, whatever it may be. That’s just me as a person. Not everyone is the same and it gets me in trouble sometimes with certain people. I won’t stop doing that because from an ethical and a values point of view, it means the most to me.”

Being an MMA official—whether it’s as a referee, or a judge—can be outright thankless. There’s little praise for a good call, or a good scorecard, and a slew of negativity when it comes to mistakes or items deemed incorrect by the public.

For Goddard, accountability and passing on lessons in an educational way are the most important traits an official can have in a role that sees much more admonishment than praise.

“It is what it is,” Goddard said. “I grew up with this sport. When I first started refereeing, nobody had a clue where it was going to go. I started refereeing by accident. I was a lifelong competitor and the whole refereeing thing for me took its own path and it went from there.

“Contrary to belief, for various reasons, sometimes we get chastised and it’s frowned upon, you don’t talk to the media but sometimes I think it’s important from an educational point of view. Sometimes I think that I can’t win. People want officials to be accountable and acknowledge when something may have gone wrong. Then an official will do that and we’ll get trashed anyway.

It’s a double-edged sword in Goddard’s opinion. When fans and media ask for answers, oftentimes there isn’t anyone there to provide them. On the rare occasion that it does happen, it isn’t always received in a positive manner.

When it comes to Goddard, he weighs the pros and cons of the individual situations. While it can be sometimes difficult to find the answer, Goddard is guided by the direction his mind and heart lead him.

“It does get hard to deal with because outside influences like fighters and other personalities, like I said sometimes you’re kind of damned if you do, damned if you don’t,” Goddard explained. “You can be criticized and maligned for not sharing and being accessible, and when you are accessible, people will accuse you of wanting camera time.

“I get to thinking that, sometimes, some of my superiors are right, that it’s best that we don’t talk. But I’m not sure what people want. I don’t know.”

All Knockouts From August 2020 | ONE Full Fights

Awesome Moments From ONE Championship Events | 11-20