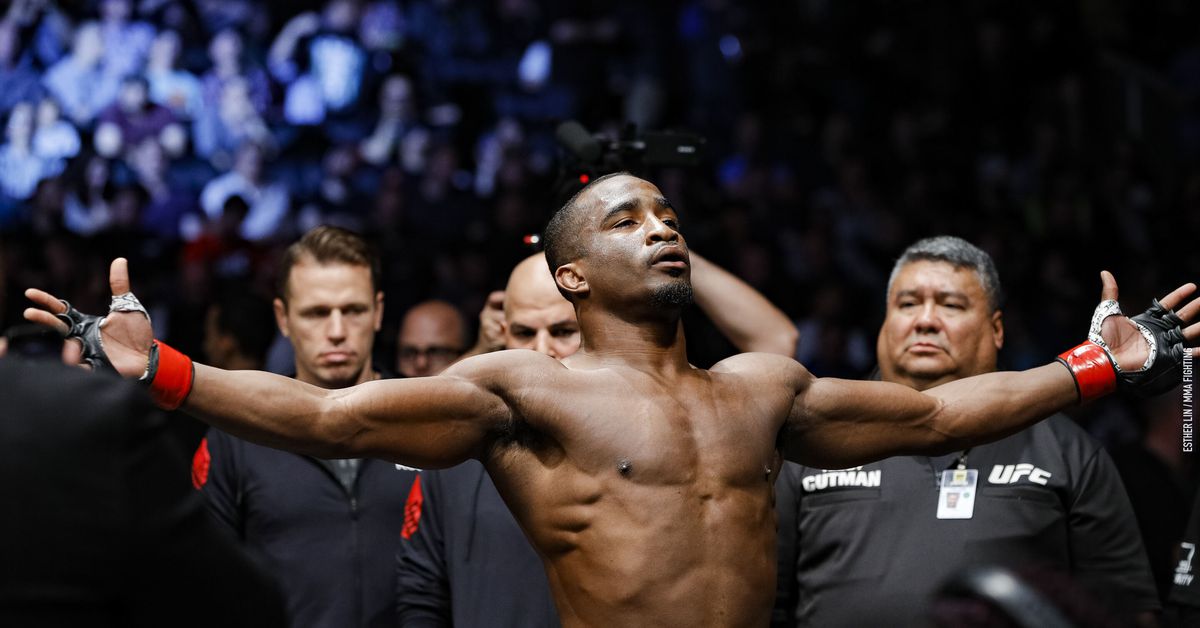 Geoff Neal didn’t know he was near death after being rushed to the hospital in an ambulance.

In fact, the welterweight prospect didn’t think anything was seriously wrong when his symptoms first emerged. How his illness started didn’t give him any kind of signal about how it would end.

“Pretty much, it started off just a headache,” Neal explained in an interview with MMA Fighting. “It was real light, and I thought it was because I had a concussion. Because we had gone really hard on the Tuesday from sparring day, and I was going against some really big dudes and we were going at it. The next day, I thought I had a concussion.

“Then my neck was stiff, so our team physical therapist, he said it might be a muscle strain headache. The next day, the headache was worse, and on top of that, I had a [104-degree] fever. That’s when I knew something was up. When you get a fever like that, you know something is really f**ked up.”

He made a trip to his physician, and Neal was told that his sodium levels were low, but he ultimately wasn’t in any real danger. So they sent him home.

The next day, Neal’s symptoms worsened as more and more things started to go wrong.

“It got to the point where I was throwing up so much, I couldn’t even drink water. Like I would drink some water, and then five minutes later, I’m throwing it back up. That’s when I knew something was really, really wrong.”

Neal made the decision to go to a local urgent care center in hopes of receiving an IV to pump some fluids back into his body. A few hours later, he was in the back of an ambulance being rushed to the hospital for emergency treatment.

“They saw my blood pressure was dangerously low,” Neal said. “They immediately started pumping me full of IV [fluids], [and] they called an ambulance to transport me to the medical center in Plain City. Sh*t started going downhill after that.

According to Neal, his headaches started on a Wednesday, and by that Sunday, he was rushed to the hospital for treatment. There, he was under a doctor’s care 24 hours a day, and the unknown infection running through his body forced him to undergo dialysis because his kidneys were failing.

“Whatever infection I had, it went septic,” Neal said. “So they pretty much had to clean my blood. It was a whole mess.”

It wasn’t until after Neal was finally stabilized that doctors told him how close he came to dying; the news came as a complete shock.

As each day passed, the former Contender Series winner has started to feel better, though he’s still waiting to find out exactly what happened to him.

“They still don’t know what caused it,” Neal said. “They know everything that happened after, but they don’t know what initially caused me to go septic. I wasn’t really too scared. I stayed positive through the whole thing. It never once crossed my mind that I was going to die or that I was close to dying. They told me that after the fact once I got better.

“They still didn’t figure out what it was. I think it was meningitis, because I had all the symptoms for it. But that’s what f**king happened.”

Because a spinal tap is required to verify meningitis, Neal passed on that particular test to verify his suspicions, especially because he was already through the worst of it on his road to recovery.

By the end of his week-long hospital stay, the top-15 ranked welterweight was definitely feeling well enough to return home, which gave him the confidence he was past whatever infection brought him down.

“Everyday I was feeling a little bit better,” Neal said. “It got to the point where it was aggravating, because I was feeling so much better. I was ready to go home and sleep in my bed, because in the same little ICU bed, they had two IV’s in my arm; I had a catheter for a little bit. It was uncomfortable.

“I slept like two hours at a time. It was so hard to just go pee cause I had to unhook stuff and I’d have to call somebody in to come unhook the IV just to go the bathroom. I started snapping on some of the doctors just so I could get out there.”

While doctors still haven’t diagnosed what went wrong, Neal knows his brush with death wasn’t related to COVID-19 because he previously tested positive for the disease earlier this year. All recent tests also came back negative.

Now that he’s home again, Neal is still restricted in terms of his activity, but that’s left him feeling like a dog on a chain just waiting to be unleashed.

“I’ve got two follow-up appointments, and that’s going to decide what’s next,” Neal explained. “It’s killing me. I’m literally going crazy. I’m sitting in the house playing video games, and I’m f**king tired of playing video games. I’m ready to get back in the gym and get back to work.

“I need it. I f**king need it. I’ve been staying away from the gym just so I don’t get the itch to get in there and train.”

Considering everything he went through, it’s nearly impossible for Neal not to take a step back and look at the bigger picture when it comes to his life and career.

The mystery disease that struck him down came out of nowhere, and there’s still no answers on what caused him to get sick. Neal just knows now that he’s on the other side of the medical emergency and that he appreciates everything life is giving him now.

“It makes you realize, life can be taken away at any moment,” Neal said. “Everything can be going good, your life can be going good and then suddenly something just takes you out. You’ve got to make sure you live everyday to the fullest and just live life. Don’t take anything for granted.”

As far as his fight career goes, Neal, who was originally scheduled to compete at UFC Vegas 8 against Neil Magny, said he feels like he could return to the gym and start training right away, but he’s not going to rush back before he’s truly ready. The only thing Neal wants right now is to get a clean bill of health and then hopefully book a fight before 2020 is over.

“I want something before the end of the year,” Neal said. “Hopefully I get good news and they’ll clear me to get something in before December. I don’t want to be a full year without a f**king fight.”

Dana White: Jorge Masvidal vs. Nate Diaz 2 ‘in the works’ for the BMF title in January

Morning Report: Dustin Poirier says he still hasn’t been offered Tony Ferguson fight but is ready when it comes

Dana White: Jorge Masvidal vs. Nate Diaz 2 ‘in the works’...

Mike Heck - September 2, 2020 0
A little over a year after the inaugural BMF title was won by Jorge Masvidal, he’s close to defending it for the first time against a familiar foe. Following Tuesday night’s DWCS Season 4: Week 5 event at the UFC APEX in Las Vegas, Dana White spoke with the media backstage and was asked about a report from TMZ that the rematch between Masvidal and Nate Diaz was set to go down in January. White confirmed a report from MMA Fighting on Tuesday that the fight is being discussed, but it’s not done as of yet. “It’s being worked on,” White told reporters. “That fight is in the works.” In their first meeting at UFC 244, Masvidal was