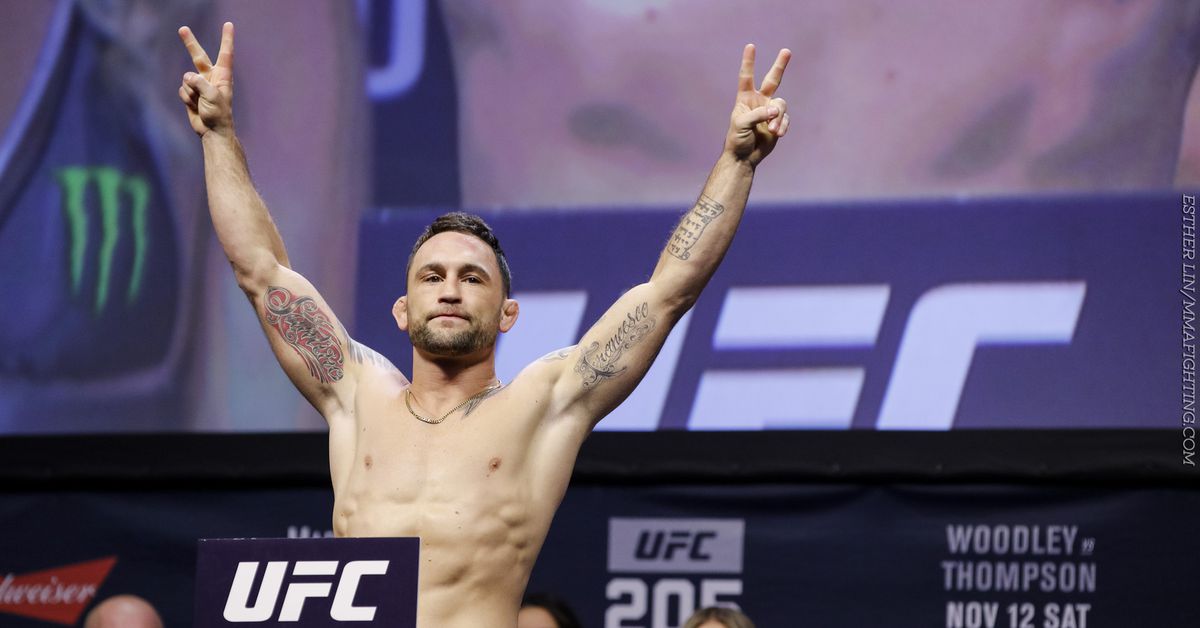 At UFC Vegas 7, Frankie Edgar did it again, coming through as an underdog against Pedro Munhoz to take a unanimous decision win in his bantamweight debut. The victory skyrocketed Edgar into the 135-pound rankings at No. 5 and set him up for one final title run.

But with Edgar now a growing concern at 135, who should he face next to work his way to a title shot? All of the men ranked above him are currently booked against other contenders (or, in the case of Cody Garbrandt, for a flyweight title shot). But that’s okay with Edgar, who has an idea about who to face while some other opportunity opens up: former bantamweight champion Dominick Cruz.

“Another guy that’s also a little older and a legend himself is Dominick Cruz,” Edgar told Bruce Buffer on Buffer’s It’s Time podcast. “A lot of people are still talking about that, so I’m definitely interested. The title is obviously my main goal, where my sight’s on, but it doesn’t have to be right away. I’m willing to fight some of those legacy fights as well.”

In 2011, both Edgar and Cruz were UFC champions, Edgar at lightweight and Cruz at bantamweight. Then, in 2013, Edgar dropped down to featherweight where he challenged for a title on three separate occasions. Since his move town to 145, fans have often discussed a potential superfight between Edgar and Cruz, and now that they are in the same divisions, a collision seems destined to happen. And should it come to pass, Edgar knows Cruz will present a difficult test for him.

“I don’t know, that’d be tough,” Edgar said. “If you chase him, he’s really good at that, and you don’t want him chasing you either. So I think you got to mix it up and try a little cat and mouse game with him.”

Cruz has not fought since his failed title bid against Henry Cejudo at UFC 249 earlier this summer, and that could be perfect timing for Edgar, who is looking to get one more fight in before the end of the year.

“I think before the year is out,” Edgar said about when he’d like to return. “Before Christmas would be ideal. I just spoke with my manager about wanting to get in there in December and he’s got some ideas. I’m sure he’s gonna run it by the UFC soon.”

Future. Anthony Smith after loss: ‘I think I’ve got some big decisions to make in my career’.

MixedMollyWhoppery on Khabib and his father’s passing.

On to the Next One. Playing matchmaker for the UFC following UFC Vegas 8.

Hey @JonnyBones thank you for the experience man, I wish you the best of luck in your journey. I know things got a lil crazy, but I just wanted to be pushed beyond my percieved limits by the LHW GOAT again. God bless and God willing we get to dance under those lights again. ✌

Return of the king?

Now this is definitely throwing shade.

I mean, fair to be upset about.

I don’t fucking know how they always forget to mention me when they put UFC and Italy in the same sentence! Commentators need to get their info together! I’m 100% Italian, born and raised and I’m gonna be the first one to get that fuckin strap.

Thanks for reading and see y’all tomorrow.

Would you like to see Edgar vs. Cruz next?

On to the Next One, Episode 7: Matches to make after UFC Vegas 8

Damon Martin - August 31, 2020 0
A late change has been made with Brian Kelleher now expected to face promotional newcomer Kevin Natividad in a featherweight bout at UFC Vegas 9 this Saturday from Las Vegas. The change was made after Kelleher’s original opponent Ricky Simon was pulled from the card after one of his coaches tested positive for COVID-19. Multiple sources confirmed the switch with MMA Fighting on Sunday with verbal agreements in place from the fighters. The bout was initially reported by MMA Junkie. With a 9-1 record, Natividad will make his octagon debut off five straight wins including his past four victories coming in LFA. He most recently competed in July when Natividad defeated Kyle Estrada by TKO in the second round. Now

On to the Next One, Episode 7: Matches to make after...