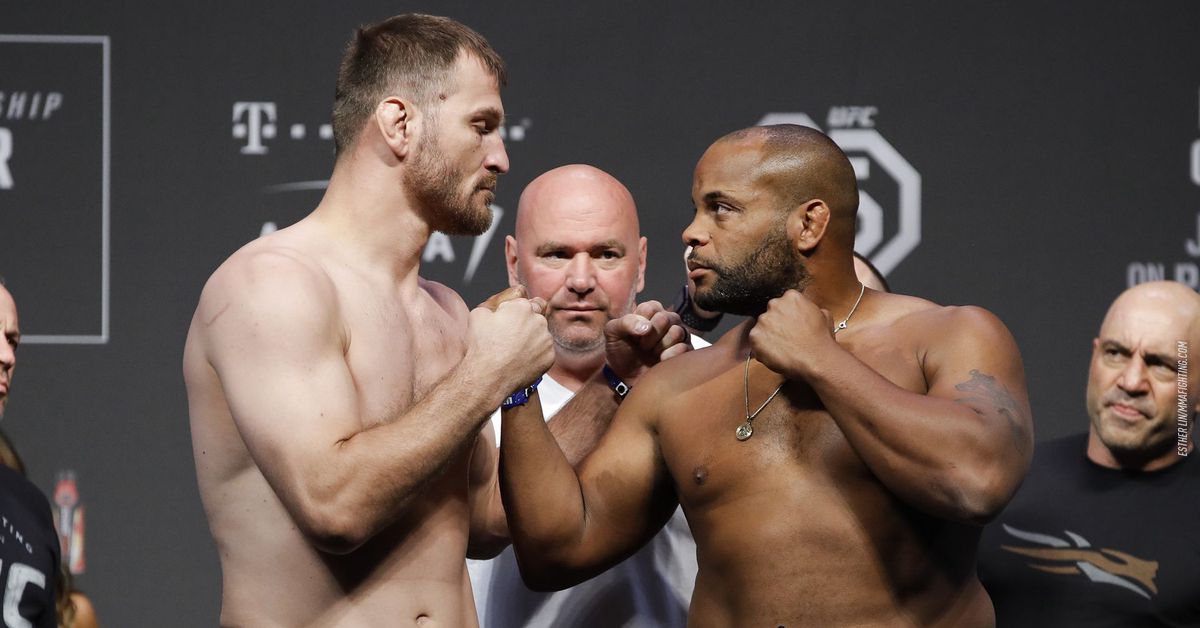 When Daniel Cormier battles Stipe Miocic for the third time at the upcoming UFC 252 card in August, there’s more on the line than just the heavyweight title.

Because Cormier and Miocic split a pair of previous fights, the winner of the trilogy will undoubtedly close the book on the rivalry. Beyond those bragging rights, UFC President Dana White argues that whoever gets their hand raised in that fight will go down as the greatest heavyweight the UFC has ever produced.

“The truth is going into this fight with all the hype, one of these two that wins the fight, definitely goes down as the best heavyweight in UFC history and they’re both candidates,” White told ESPN recently.

It’s hard to argue with that logic considering the gaudy resumes Miocic and Cormier have put together over their respective careers.

Prior to his title loss to Cormier in 2018, Miocic had already broken the record for the most title defenses in UFC heavyweight history while beating a long list of top contenders and ex-champions along the way.

Meanwhile, Cormier was undefeated as a heavyweight until his second fight with Miocic last year with a long list of wins in both the UFC and Strikeforce. He may have done even more at heavyweight if not for his decision to drop down to 205 pounds to avoid a potential clash with longtime teammate and close friend Cain Velasquez.

At light heavyweight, Cormier went on to become champion in that division as well, which arguably puts him on the short list as one of the greatest fighters in the history of the sport regardless of weight class.

The magnitude of this fight isn’t lost on Cormier, who has already declared that win, lose or draw, this will be his final appearance inside the octagon.

If White has his way, Cormier would continue fighting regardless of the outcome of his fight against Miocic.

Rarely has the UFC president attempted to talk a fighter out of retirement but that’s the kind of admiration White has for Cormier even as he approaches his 42nd birthday in 2021.

“I hope it’s not,” White said about the trilogy with Miocic serving as Cormier’s final fight. “You know me, when it’s time to retire for guys, I’m the first guy to say hey, you should probably do it.

“What’s crazy is Cormier is up there in age but he’s still one of the greatest of all time. Dominated two weight classes. I still think he’s got a lot left but it isn’t my body. He truly knows the answer to that.”

Yorgan De Castro vs. Carlos Felipe on tap for UFC event on Oct. 3