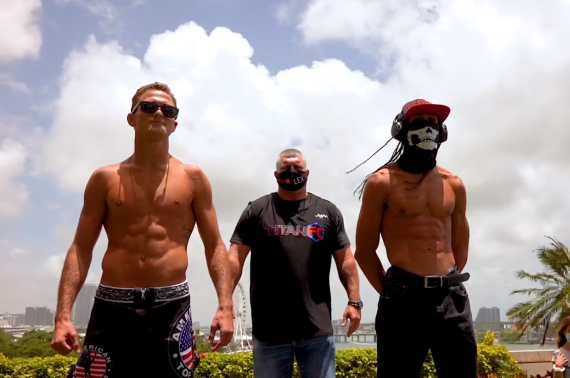 Titan Fighting Championship returns this week with Titan FC 61, and it is now official as all fighters have weighed in.

The six-fight event headlined by a bout between Danny Sabatello and Raymond Ramos for the vacant bantamweight championship. Sabatello (7-1) has won two fights inside the promotion and is coming off a submission victory over Chris Johnson. His only defeat came to Irwin Rivera, who knocked him out in the fifth round of their title fight at Titan FC 58. He’ll look to finally get championship gold, and had no issue making championship weight by coming in at 134.6 pounds.

Looking for his own shot at glory is Ramos (5-3). While he lost three of his first five fights, Ramos is undefeated in the Titan FC cage. He submitted Alberto Bias and won a decision over Kenny Porter to earn this opportunity. Ramos weighed in at 133.2 pounds for his first title affair.

* Ynastrilla vs. Keller has been rescheduled to a catchweight.

Damon Martin - June 27, 2020 0
Any time the lightweight title is on the line, Dustin Poirier has a vested interest but he’ll be keeping a very close eye on the upcoming showdown between Khabib Nurmagomedov and Justin Gaethje. He hopes a win in the UFC on ESPN 12 main event against Dan Hooker will put him one fight away from another shot at the belt but Poirier has also faced both men previously. Back in 2018. Poirier engaged in a “Fight of the Year” candidate with Gaethje before finishing him by TKO in the fourth round. After becoming interim champion, Poirier suffered only his second loss at lightweight in the UFC when he fell to Nurmagomedov by submission this past September. In theory, Poirier would

The Meteoric Rise Of Garry Tonon